Who is Hal Hughston?

Hal Hughston, III is the prosecutor and attorney for the city of Tuscumbia who also practices in the areas of criminal defense, personal injury, estate planning, divorce, and family law. From the Shoals, Hal attended Deshler High School and graduated in 2001. He then attended Samford University in Birmingham before earning his Juris Doctorate from the Mississippi College of Law and becoming board certified in 2008.

He began practicing law in Tuscumbia in 2008, becoming the 3rd generation of his family to practice law in the Tennessee Valley. Hal values the history, culture, and - - above all -- the people of the Shoals. He is proud to carry on the family tradition. 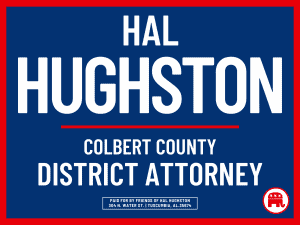